The Getty Villa--located on a hilltop of the Santa Monica mountains in Pacific Palisades, California, and with a glimpse of the Pacific ocean--is a long way from Italy. 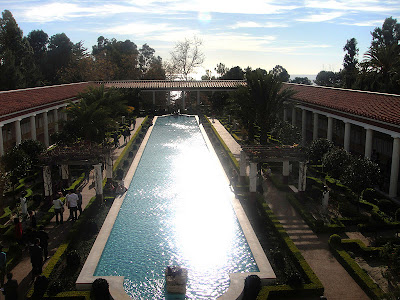 But the Getty is inspired by the Villa dei Papiri (Villa of the Papyri) that was located near the ancient city of Pompeii, Italy, and was covered by the volcanic eruption of Vesuvius in 79 A.D.  Oil tycoon J. Paul Getty built his version in Southern California in 1974. The villa itself serves as a beautiful museum for fine art and Greek, Roman and Etruscan antiquities, but I love it for the Italian style gardens. You probably guessed that already. 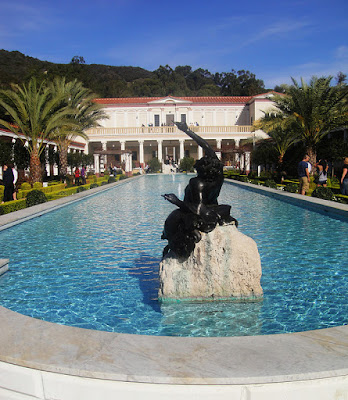 The main garden is striking with its commanding pool in the center complete with statues on both ends. This formal garden is surrounded on either side with precisely trimmed boxwood and topiary shrubs, the acanthus plant, ivy, palm and pomegranate trees, oleander and damask roses. Roman control over nature. Order. Symmetry, with a focus on evergreen plants, not necessarily flowering plants. 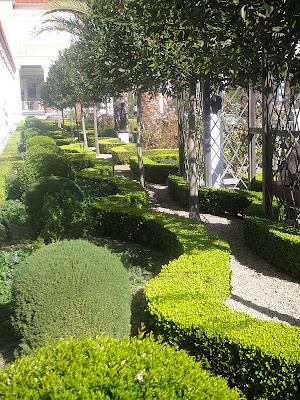 The herb garden (below) features the fruit trees and herbs that would typically grow at a self-sustaining villa of a wealthy Italian, whose father-in-law just happened to be Julius Caesar. 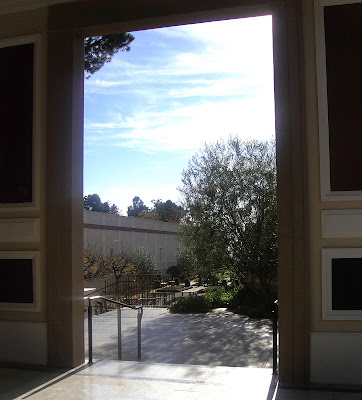 At least one of several fruit trees was beginning to bloom the day I visited in January but even without a leaf, the bare bones and shape of this pomegranate tree is a beautiful feature in a winter garden. 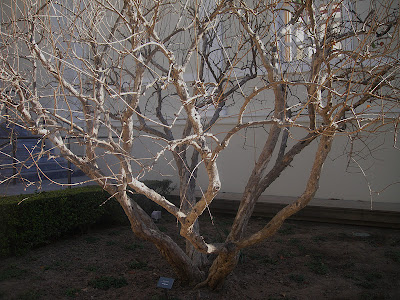 It is a given that an Italian villa wouldn't be complete without grape vines and numerous olive trees and so you find those here, as well as lots of thick, shrubby--and one of favorites--rosemary (in bloom to boot). 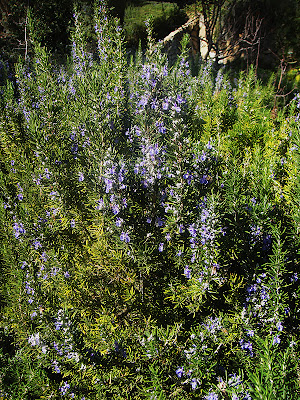 In contrast, the wispy papyrus plant flanks a wall fountain in the herb garden. 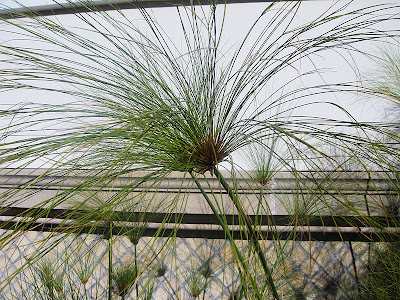 Water, of course, whether in the form of fountains or pools, is featured in all four gardens on site. 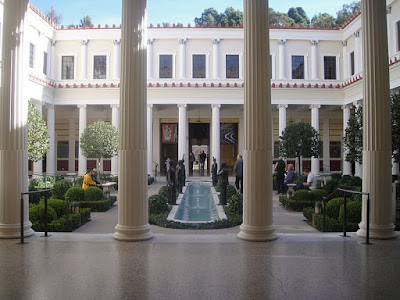 My favorite garden at the Getty Villa is the center courtyard (above and below), classically quartered with four beautifully shaped bay laurel trees in each corner and hedged with boxwood. It is also divided down the middle of the courtyard by a smaller version of the main pool. Ten stately columns on all four sides provide architectural eye candy and a beautiful segue to the rooms of the villa.  I can imagine a great location for my yoga practice in this lovely space.  The setting alone makes me feel calm and centered immediately. 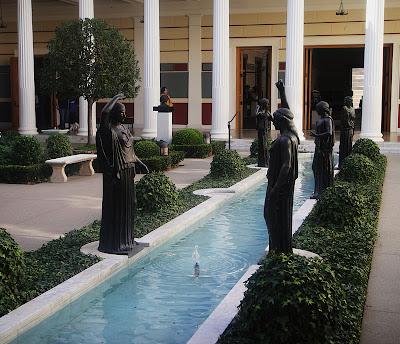 Finally, I couldn't resist photographing just a peek at the smallest, most intimate East garden through this paned window.  Viewing my garden through the windows of my own home is one of my favorite ways to do nothing, especially if it involves relaxing on a sofa. As I look into the East garden at the Getty, I know for sure that I could be completely happy with this little slice of Italian style garden heaven outside my window in San Diego.  This, signore e signori, is garden envy.