So far so good.

What's more, the Huntington Library and Botanical Gardens
(a favorite of mine) is minutes away. Pasadena is also home of the annual Rose Bowl and Tournament of Roses Parade, which I attended once with family and friends on New Year's Day about 20 years ago.
We marveled at elaborate floats all designed with flowers.
Now I watch the parade on television every year and
I love Pasadena more with every visit.

So, when the Garden Conservancy released its 2012 directory recently of the nation-wide Open Days garden tours, I was excited to see several Pasadena home gardens on the list and nothing else on my calendar for the same weekend!

I visited five of the six on tour in late April.
This garden intrigued me at the curb. 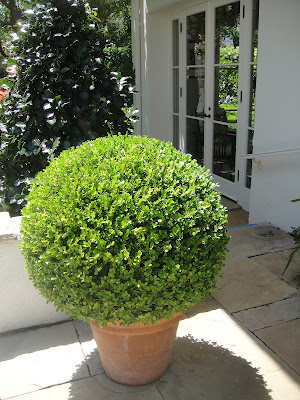 I had a feeling I would like it.
Clipped and shaped boxwood is one of my favorite things, after all. 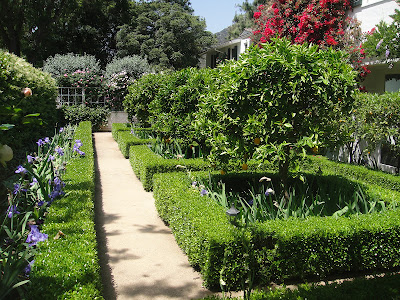 So when I stepped into a formal French parterre with blooming iris,
orange and kumquat trees and boxwood hedges, 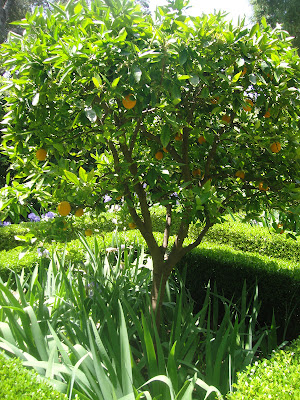 I was immediately in love. 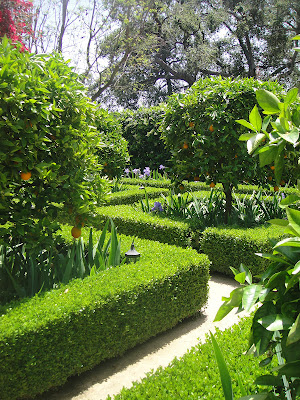 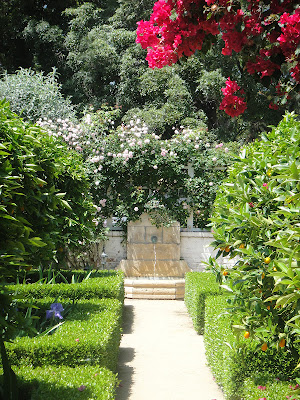 This would have be more than enough for me,
but now throw in a wall fountain 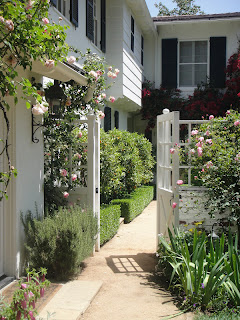 another rose covered fence on the other end of the parterre

and a vibrant red bougainvillea.
Magnifique! 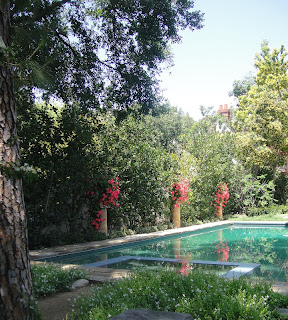 The backyard pool is simple yet très élégante. 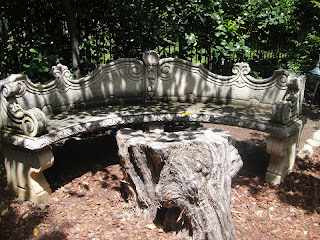 This bench and a tree stump that serves as a table
is perfect in the woodland garden setting in the back. 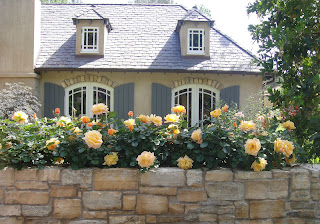 My other favorite garden on this tour is described as
the 'French country' house. (No surprise that I might like it ). 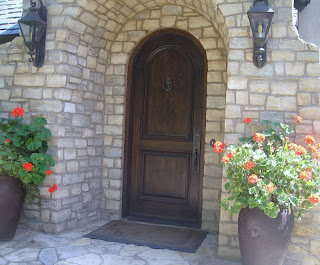 The house, with blue shutters and this entryway, designed with pale yellow brick of mismatched sizes and flanked by large pots of bright flowers, does kind of transport you to a Provençal frame of mind. 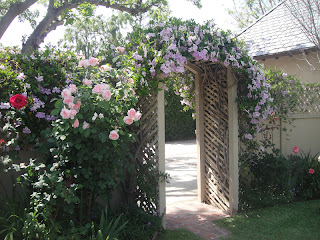 The entry to the backyard garden is framed by an arbor covered
in lavender trumpet vine studded with blooms.

The large rectangular yard features a pool and an expanse of lawn surrounded by curving borders filled with trees, shrubs and blooming flowers. Much of the lovely design and work is by the owner.
All of it tastefully done. 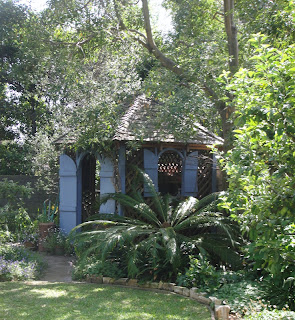 One of my favorite features here is the gazebo-like potting shed.
A work space that doesn't look like a work space, but instead
becomes an attractive feature itself in the garden. 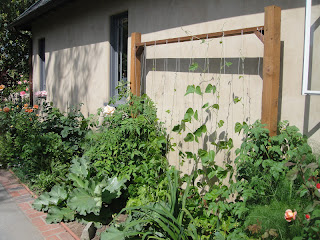 Everything in this yard is tastefully done, even the trellis is no exception. 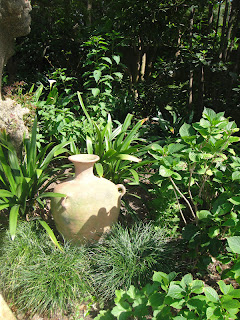 The garden also features a classic yet simple ornamental pot amid
low growing plants, something most of us could easily pull off in our own yard, 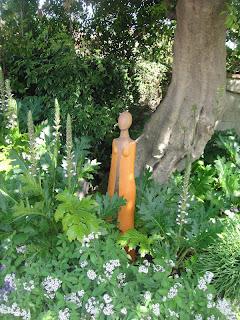 and an unusual and intriguing sculpture delicately placed
under a large tree. Trickier, but possible.

Touring gardens is a great way to spend my day-- but it is also dehydrating. I made a quick stop for some excellent Mexican food (one of the perks of Southern California) at Doña Rosa Bakery & Taqueria.

Feeling perkier after a freshly made horchata and sopes, and with just a little more than one hour til closing, I zipped over to the recently opened, newly renovated Japanese garden at the Huntington Library before heading down the I-5 South toward home in San Diego.

You might be interested to see the new $1 million waterfall at the Huntington,
so please join me in the next episode of
GardenEnvy.

Posted by gardenenvy at 8:52 PM