Bonsai, to me, is a mysterious art form.  Yes, art more so than gardening.
Perhaps because of its Chinese and Japanese origin. Disciplined.  Precise.  Obsessed with miniature plant form. 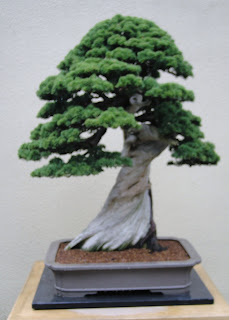 Mature trees, like this juniper, are constrained in shallow pots and miniature form.  They are twisted, shaped with wire and pruned over years to achieve an artistic version of a tree or plant not usually seen in nature. 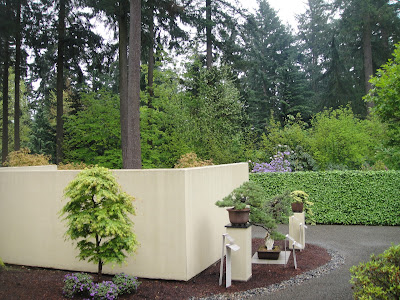 I had never seen a garden devoted to bonsai until earlier this year.  I was visiting the Rhododendron Species Foundation garden last May in Federal Way, Washington, just south of Seattle. 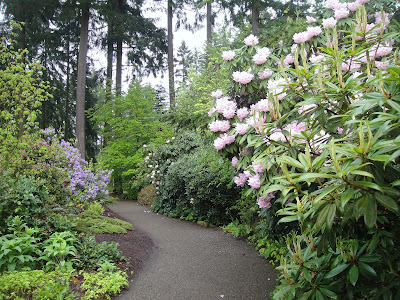 I was on the road for the dazzling rhodies--Washington's state flower--on a
drizzly Spring day and the bonsai garden happened to be at the same location. I didn't realize I was getting a two-for-one trip and I wasn't expecting to visit the bonsai, much less to enjoy it as much as I did. 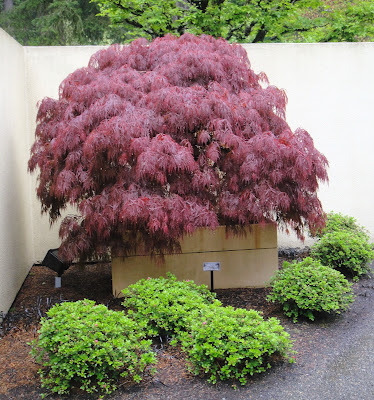 This Red Laceleaf Japanese Maple near the front entrance lured me into what truly is an intriguing and beautiful collection of about 60 bonsai. The rhododendron species are awesome in the Pacific Northwest, 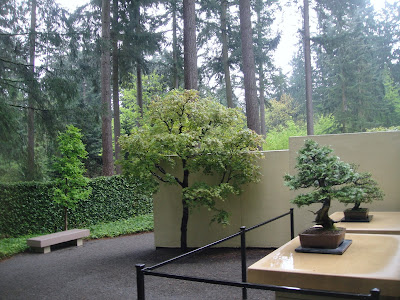 but aesthetically speaking, I enjoyed this bonsai garden more than the rhodies in this location. The garden (and bonsai)  invokes elegance; a sense of  museum quality plants formally presented against a blank white canvas, and separated from a gorgeous, woodsy surrounding by neatly trimmed green walls of foliage. 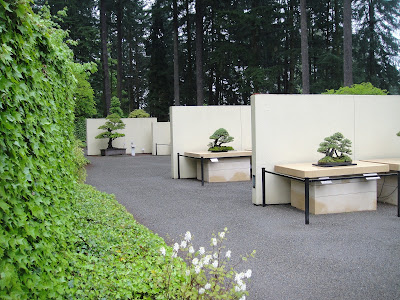 And it strikes me that these miniatures are nicely juxtaposed with their normal sized brethren. 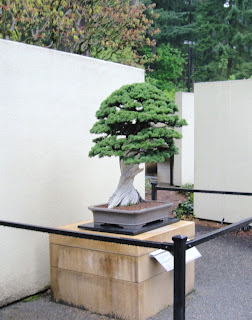 The Chinese Juniper grafted on Sierra Juniper is beautiful with its mushroom-like form and twisted white trunk. The artist is Kenneth Sugimoto and the trunk: more than a thousand years old. Bonsai require specialized care and tools--and a lot of patience. Not that it took a thousand years to become a bonsai, but Rome, as they say, wasn't built in a day. Neither is the bonsai. 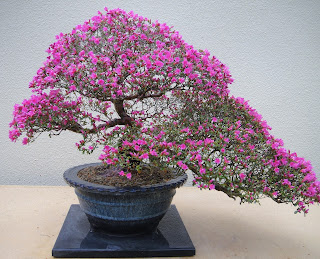 This azalea plant originated about 1960 and has been a bonsai since 1979. A blooming miniature? What's not to love?  It is drop dead gorgeous in a dark blue pot. 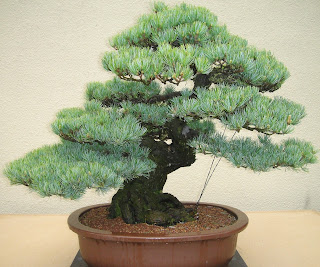 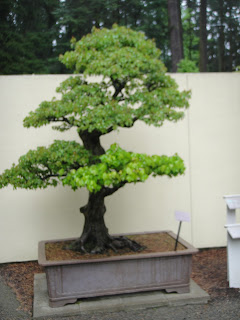 One of the oldest bonsai on display (and one of the largest) is this Trident Maple (Acer buergeranum) that originated in 1820 and became bonsai in 1880. 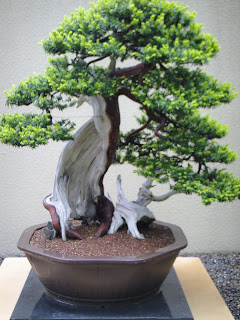 The tiny foliage on this Korean Yew, relatively only a baby bonsai since 1986, is attractive but completely upstaged by its dramatic trunk. 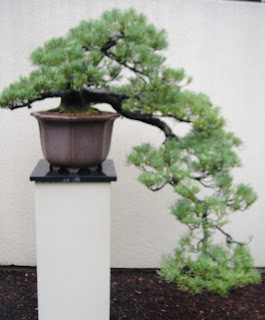 A Golden Atlas Cedar that cascades downward is one of my favorites. 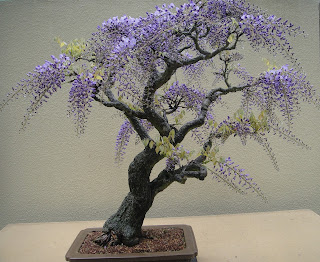 And the pièce de résistance is the Chinese Wisteria vine in bloom.  It was created in 1975 when the artist air layered it from a mature wisteria vine in his yard.  I am a sucker for a wisteria in bloom, even in miniature. 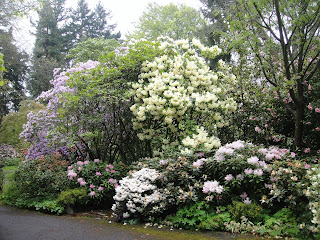 Moral of this little story? Come for the rhodies, but definitely stay for the bonsai.

Copyright 2012 by Jeannine.  All Rights Reserved.

Posted by gardenenvy at 7:21 PM